Hello,
we had the chance to make an interview with Mélanie St-Pierre about her upcoming movie Garm Wars. She also talked about Anime and the work of Mamoru Oshii.

Garm Wars will be released in Germany on December 4, 2015.

Animenachrichten: Hello Mélanie, first thank you for the interview. It’s maybe a strange first question, but on Twitter you retweeted about Garm Wars and you liked the German DVD/Blu-ray Cover. Do you like the old cover art more on VHS than the modern DVD/Blu-ray covers?

I am actually really an appreciator of both styles, depending on the genre. I love the whimsical freedoms that the old-school VHS covers took, whereas the newer style of cover art is usually a bit more mysterious.  It was interesting to see the different covers for Garm Wars because the genre is very hard to place: the film can probably best be described as a Live-Action Anime. I think that the North American cover was more of a traditional genre cover, but personally, the German DVD cover for Garm Wars is my absolute favorite!

AN: Mélanie you are leading actress in Garm Wars, can you tell us more about your part in the Movie?

Mélanie St-Pierre: In Garm Wars, I play the protagonist Khara-23. She is a fighter pilot from the Columba, a tribe of Garm (clones) who have been at war for as long as anyone can remember. After a battle with the enemy Briga tribe, Khara gets separated from her squadron and finds herself in the wastelands of Annwn, chasing a mysterious trio: a Kumtach elder (played by Lance Henriksen), his captor, a Briga soldier (played by Kevin Durand), and a small Druid girl, the last of her tribe.

Khara is one of many Khara pilots, but in her pack she is an anomaly: she has self awareness, and questions not only her purpose, but also the meaning behind the existence of the Garm. These questions haunt Khara, who agrees to travel with the Kumtach, Wydd, to the forbidden land of Dual Grund, where she hopes to find answers.

AN: Did you know Mamoru Oshii’s work as a director before you started shooting Garm Wars? Did you watch other movies of his like Ghost in the Shell or Avalon?

Mélanie St-Pierre:  Yes, I did know his work! In fact, Ghost in the Shell is one of my favorite animes. I had seen quite a few of Oshii-san’s films prior to filming, and always really adored Patlabor 1&2, as well as Avalon, which I thought was incredible. It was such a great experience to work with a director that I admire so much, and who is so specific in his work… it almost felt as if I spoke his language, by being familiar with his previous work. Anime fans will certainly recognize many of the recurring Oshii themes in Garm Wars!

I still remember seeing the audition breakdown for the first time, my heart skipped a beat when I saw his name, I couldn’t believe he was making a live action film in Canada! I still feel so lucky and grateful to have had the experience; it was very unique!

AN: Mamoru Oshii is a famous anime director, do you watch anime too and if you do, what’s your favorite anime?

Mélanie St-Pierre:  I am definitely a fan of anime, and have been watching more and more since shooting Garm Wars. As a child, I had a close friend who was very much into anime, manga, sci-fi and fantasy, and she first introduced me to it all. I would say my taste in anime has been pretty varied. I really love the philosophical and social commentary in Mamoru Oshii’s films, but I also really love the fantastical anime films, like some of Miyazaki’s. Spirited Away, in particular always struck a chord with me.

I find it very exciting that so many anime films are getting attention in mainstream Hollywood… I’ll be very interested to see how different material is going to be adapted, how much will be changed. There is so much excellent anime that I’m sure we’ll be seeing more and more adaptations! I’m personally looking forward to seeing Battle Angel Alita come to life onscreen…

AN: Garm Wars is a Cyberpunk type of movie, are you a fan of the Genre?

Mélanie St-Pierre: Yes I really am, I think the genre has so much to offer in terms of imagination and storytelling. There are a few titles that come to mind that I really loved, including of course The Matrix. David Cronenberg’s eXistenZ is another one that I thought was so creative and fun; I really found it interesting to watch Avalon after having seen eXistenZ, as the films have quite a few similarities, but are completely different in their style of storytelling. Ghost in the Shell and Avalon really showcase the philosophical potential of the genre, and I really hope that the new Ghost in the Shell remake takes full advantage!

AN: Your co-star is Lance Henriksen, what was it like to work with him? He is an icon for the Horror and SciFi Fans because of his parts in Terminator and Aliens.

Mélanie St-Pierre:  I was also a big fan of Lance’s work before we filmed Garm Wars, especially Aliens and his series Millenium. I wasn’t sure what to expect when we started the shoot, but working with Lance is exactly what I had hoped: he is an extremely talented actor, a true gentleman… and an absolute badass. Like his character Wydd, he is very intelligent and creative, and brought so many of his own ideas and philosophies to the table. It was a real honor to work with him, and I hope we remain friends for a very long time.

AN: The story of Garm Wars is very philosophical and last weekend Doctor Who had an episode about war, too. The Doctor gave a speech against war and for humanity. In Garm Wars there are the clone Soldiers for the war, do you think SciFi is a good way to show how bad war can become in the future, like Garm Wars is trying to tell?

Mélanie St-Pierre:  I think that SciFi has a very unique edge in it’s potential for social or philosophical commentary. As imaginative as a SciFi world can be, by nature it is always rooted in reality, by way of technology, etc., which gives it the perfect platform to discuss certain real-life issues. Some films have really stood out in their commentary and influence. V for Vendetta, for one, I think accomplished this really effectively. Though it is in a very slick, stylized package, the messages and themes were clear… and even sparked the use of certain symbols, like the Guy Fawkes mask. I think SciFi is a medium that can and should be used to discuss things that are important to us collectively.

The commentary in Garm Wars was something that really attracted me to the project: Khara and her companions seek the truth to their existence. Why do they fight? What meaning does the Garm’s endless warring have? Have they always fought? I thought this was an extremely interesting discussion, considering the state of the world today. I do hope that people seeing Garm will be inspired to discuss humanity, the unending cycle of war and what it means to be human. 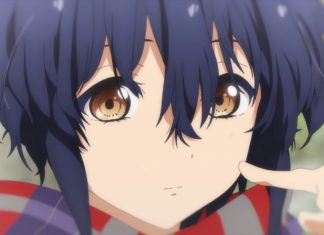